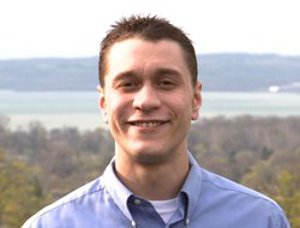 Christopher Kusznir, the son of two first-generation immigrants from the Dominican Republic and Poland, loves Ithaca for its diversity and warm embrace of civic engagement.  He has worked as a business professional in the Ithaca-Tompkins area since 2005, when he joined Audrey Edelmen & Associates as a Licensed Salesperson.  During his time there, Kusznir developed an interest in business strategy and marketing.  In the span of four years he subsequently purchased a rental property and co-founded two successful local businesses—Moving Box Studios and Top Shelf Liquor.  During that time he also served as a Media Consultant for Yellow Book, where he managed revolving sales campaigns and consistently exceeded sales targets.  Kusznir ultimately left Yellow Book to purchase and revive the Subway Franchise located on the Ithaca Commons.

Furthering his interest in bettering the Ithaca Commons, Kusznir joined the Commons Advisory Board, which works to regulate sign and use permits on the Commons.   Having discovered a passion for public service, he went on to compete in the 2011 Ithaca City Mayoral Election.  Despite running a successful campaign, Kusznir would ultimately withdraw from the election following the early birth of his first child.  After spending two weeks in the hospital, he returned home with his new daughter Madison Lee Kusznir.  At that time he decided that his priorities were with his family and elected to endorse one of several opponents in an effort to ensure victory for the next best man.

Following the election, Kusznir continued his public service on the Commons Advisory Board.  He would later accept an additional seat on the Commons Client Committee, which currently works to oversee the future project to repair and redesign the Ithaca Commons.  Kusznir eventually decided to return to the business that started his professional career, Real Estate.  He would join Ithaca native Bryan Warren and his family owned firm Warren Real Estate, before ultimately moving on to create his own firm, Key Brokers integrated Real Estate Service, with new partners Anthony Medina and Pedro Tavares.  Currently, Kusznir continues to provide oversight for his three businesses, while pursuing his career in Real Estate.  He is a loving father and ambitious entrepreneur with experience in Real Estate, Business Start-up, management, and sales, Insurance, Marketing & Fundraising.

Welcome home! This sunny 2BR/2BA ranch has never before been on the market. Sitting on just under 3 beautiful private acres, the home also features a 2 car detached ga...

Turn key opportunity to own a fully occupied duplex offered for less than 4x the gross annual income. Property features a 2BR/1BA apt on the main level and a 3BR/1BA apt...

Beautiful building lot on the corner of Ringwood and Pleasant Hollow Rd. Bring your blueprints and build your dream home!